On the school side of what we do, Michael and I are offering another special event: NLP for Personal Change & Life Success Seminar.  It’s one of our Power of Mind workshops,  a full day event, happening Saturday, 9/28/13.

Right now we are offering an “early bird” special price, just $67. The special ends this Sunday, then our seminar reverts to its regular price of $97  This amazing seminar is only offered once or twice a year, so the time to enroll is now.  Our NLP for Sales Seminar for this coming weekend filled right up, and we had to end enrollment early.  So, as I like to say: get while the gettin’s good!

What is NLP?  NLP (Neuro-Linguistic Programming) can be defined as: the study of successful thinking. If it weren’t already taken, the slogan for NLP could be: “Be all that you can be.” Yes, you can. We’ll help you get there, with the transformational secrets you’ll learn in this amazing 1-day event.

If you could feel however you wanted to feel (such as calm, motivated, creative, happy, etc.) whenever it was useful to feel that way, would that be of interest to you? If you could connect with people on a deeper level and develop instant rapport, would that be of interest to you?   Sounds good to me!!  In this seminar, we teach simple techniques you can use immediately to increase personal satisfaction, self confidence, influence and power. Eliminate undesirable habits! Program in more useful ones. Control your emotional states and more!

This seminar/workshop is hands on, with class demonstrations and exercises as well as lecture. So you can expect a very interactive and experiential training event. You will learn with not one, but TWO Licensed Trainers of Neuro-Linguistic Programming ™, Connie & Michael Brannan.

If it sounds good to you, and you can see the benefit, and it feels like an amazing opportunity:  You can sign up online here: http://www.seattlenlptraining.com/Power-of-Mind-Hypnosis-and-NLP-Seminars.html.  We have a “buy now” button.

We do hope you’ll join us!

I bought some chicken yesterday from a local supermarket deli.  Got it home, and opened the packaging.  Found THIS!  Yikes.  Battered and fried feathers. 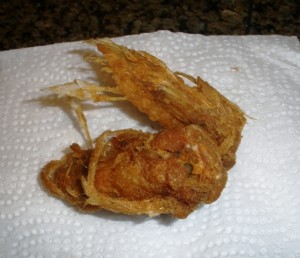 How repulsive, obviously they lacked the big picture on plucking the chicken before you cook it.  If you look up the word “grotesque” in the dictionary, this chicken wing could be there.  I didn’t even want to touch this thing, but I had to, to toss it into the garbage can.  I’m not eating THAT!!  Ick, and yick!

In my Neuro-Linguistic Programming work with clients “ick and yick” can be useful.  People come into my office wanting to stop smoking.  People come into my office wanting weight loss, which means, behaviorally,  eating less  to no sweets, pastries, cookies, chocolate, candy of all varieties, brownies, twinkies, donuts, ice cream, sugary sodas, french fries, potato chips and other carb-laden, junky processed foods that pack on the poundage on the body.  I can help with that!  Ick and yick finds a home.

When I was a kid my mom tried to make me eat liver.  It’s a nightmarish recollection.  I hate liver.  As an adult, I would never choose to eat liver, because it’s horrendously repulsive, in looks, taste, smell, in every way invented.   My response to the thought of liver is this:  “get it away from me!  No way in hell is that thing going into my mouth!”  Like that chicken wing yesterday.

With NLP we can take this feeling “get it away from me, ” capture it, and attach it to anything, where it’s useful to do so.  We can attach it to chocolate.  To cigarettes.  To brownies.  To anything.  If you don’t like it, you’re not going to eat it, or smoke it.  This is called “aversion” anchoring.  It’s another piece of the work, and it helps!  On the flip of away from, I create good feelings that people prefer over cravings, things like calm, happy, joy, satisfied, healthy.  Towards something wonderful and away from something disgusting, now we have a propulsion system of change.

I walk the talk, and use the tools for my own success.  I took that chicken wing, and captured the revulsion, and now that’s how I feel about chocolate brownies (my former weakness).  I’m not buying or eating any brownies today.  None.  Not interested.  I’m not eating any brownies tomorrow, either.  Nor the next day.  When will I want brownies?  Possibly never.  And I’m OK with that.

This is called taking control of your life, and it’s a good thing!

We do get a newspaper delivered to our home, but I don’t look at it.  Michael likes the feel of paper, the tactile experience of reading a newspaper.  I get my news on the internet.   Which seems easier to me, more immediate, and doesn’t feed the landfill.

Here’s an article I read today which I’d like to share with you.  It’s good advice.  It’s about how to stay sane in a stressful work environment.  (I’ve had plenty of those over the years, when I worked for other people before I found my life’s calling.)  Here’s the article, on yahoo:  Seven Tips to Stay Sane at Work.

In a nutshell, it’s telling you to adopt specific FEELINGS which assist you in maintaining sanity in the face of stress:  calm, humor, dissassociation (feeling separate), empathy, positivity.  Good feelings.  Wonderful ADVICE.  But HOW to DO all that?  How to create and capture states of mind/body in yourself and use them when you’re not feeling them?

That’s where hypnosis and NLP shine!   Because it’s absolutely true.  Changing how you feel changes how you think and how you experience life, how you interact with others, and what you do behaviorally.  We can all change our lives by feeling how we find it useful to feel.  That’s NLP’s bread and butter.  It’s called anchoring.  Finding the positive state in yourself, growing and expanding it, and then capturing for future use.

The article doesn’t tell you HOW to feel calm.  I can.  How to maintain calm when Joe at work is doing his best to get under your skin.  I can.  We’ll set you those stimulus responses in your body so that they flow automatically.  Where stress used to trigger negative emotions, it won’t.  This is what I do.  And I love it.

If you’ve got stress, and want to FEEL differently, like this article advises, but haven’t a clue how to DO that…let me help.  🙂  And remember, Michael and I are offering an event just for stress release on December 10th called “Banish Holiday Stress.”  You’ll learn anchoring, and more.  More info is here: